My Interview in Southern Writers Magazine

Dear Ones, I was invited to do an interview in Southern Writers magazine this month. It was great fun to be interviewed about my southern roots and the southern themes in my work, as well as my writing process.

Susan Reichert (Editor-in-Chief) and Annette Coleman Mastron (Communications Director) of the magazine did a great job with the interview, and I am grateful for the opportunity to appear in the magazine. 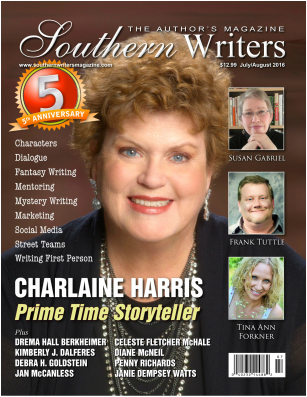 Unfortunately, the only way you can read the interview is to buy a copy. I understand if that isn’t an option, and I will share some of my answers to the interview questions here on this blog at a later date. Keep in mind it won’t be the actual interview, but the questions and answers their professional interview was based on.

Here’s my answer to the first interview question I was given. The finished product is based on my answers.

Southern Writers: I read on your website that you write with passion, humor and insight about Southerners, both wise and wounded; teens, both ordinary and odd; and the people who love them, both explicit and unconscious. Did you choose writing insights about Southerners or did it choose you?

SG: In the interest of honesty and perhaps bravery considering this is a magazine for southern writers, I will tell you a secret. For many years I was ashamed of being a born-and-raised southerner. In fact, until a few years ago I was running from it. In college, I dropped (most of) my southern accent and cringed every time I saw Confederate flags on the back of beat up pick-up trucks, a common sight in my neck of the woods, as well as the abundant church signs telling me to Repent!

For a decade of my life, I became a marriage and family therapist. In part, to understand the crazy characters in my southern gene pool. Then when I finally got around to writing (at age 38), I swore I would never, ever write southern fiction. Never. Sure, I had famous southern writers on my bookshelf. I even dreamed about them. One night in a dream, William Faulkner came and sat on the end of my bed. Another night, Eudora Welty delivered a box full of letters to my bedside table. Yet I was convinced I was not that kind of writer.

A few years ago, I finally divorced myself from the South and moved to the West. Of course, in the first week I was living in Colorado, a pickup truck from Texas passed me with the biggest Confederate flag I’ve ever seen in my life waving out the back. Point being, even when you move across the country, you can’t get away from your roots.

Eventually, I realized I was trying to be something I wasn’t. I was an oak tree trying to survive in a semi-desert. The West was starkly beautiful. It was stimulating. It was wild. But it wasn’t me.

In the end, it was the land that called me home. And once I returned to the southeast, I reclaimed my roots with renewed humility. Or perhaps I claimed my roots for the first time. With this choice, I began to see beyond all the issues that had bugged me and still bug me sometimes, (think bathroom law!) and started noticing the things I really love. Then I began to put these things in my fiction.

While my non-southern (agented) writing never took off, my southern writing has flourished. It turns out that I am good at telling southern stories. Who knew? Certainly not me for many years. But sometimes the thing we run from the most is the very thing that will save us.

Then in 2012, Kirkus Reviews gave my novel, The Secret Sense of Wildflower, a starred review and named it a Best Book of 2012. Offering further proof that I’d found my way home. I imagine I’ll stay here the rest of my writing life. What I can’t believe is that of the over twenty years I’ve been writing, I resisted being a southern writer for over a decade. We humans can be a tad dense sometimes.

Did I choose writing insights of southerners or did it choose me? Good question. I think both things are true.

What do you think makes stories about Southerners so interesting to read?

Tell us how the story for The Secret Sense of Wildflower came about and what drove you to write the sequel in Lily’s Song.

What was the most difficult scene concerning techniques to write in either or both?

Tell our readers about Susan Gabriel. What is it like, writing, for you?

Don’t these sound like fun questions to answer? Stay tuned. I’ll post the answers to the rest of the questions at a later date.

Meanwhile, thanks so much for reading! And thanks again to the wonderful Susan Reichert and Annette Coleman Mastron for my interview in Southern Writers magazine. xo