“I just read The Secret Sense of Wildflower and all I can say is wow! As a retired library director and former English teacher, my favorite genre for personal reading is Southern Literature. I found Wildflower by accident when browsing Amazon for something Southern to order and read, and finished it in two afternoon sessions. The book is wonderful: I immediately ordered the sequel a few minutes ago. Love, love your writing!”

“Just finished the book and I wanted to let you know that I really loved it! What a heroine you’ve created in Wildflower. Can’t wait for the sequel.” 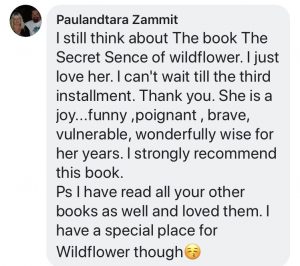 “There are two things I am afraid of. One is dying young. The other is Johnny Monroe.”

Small southern towns have few secrets. But when a grieving daughter confronts the local bully, she unwittingly triggers a series of traumatic events that will change her life forever.

Appalachia, 1941. Thirteen-year-old Louisa May “Wildflower” McAllister’s heart still aches for her father. A year after her dad’s tragic sawmill accident, she relies on her strength of spirit and her heightened intuition to deal with a critical mother and cope with the aftermath. Despite these hardships, Wildflower has a resilience that is forged with humor, a love of the land, and an endless supply of questions.

But when she’s targeted by the town’s teenage bad boy, she may need more than her “secret sense” to survive.

Will Wildflower fall to another tragedy or will her strength be enough to carry her through?

With prose as lush and colorful as the American south, The Secret Sense of Wildflower is powerful and poignant, brimming with energy and angst, humor and hope.

Click “Buy Now” below to get your autographed copy and start enjoying The Secret Sense of Wildflower. Includes a personal “thank you” from the author and a personal dedication if desired.

The Secret Sense of Wildflower, autographed edition. List price $11.99, Only $9.99 plus shipping.

Note: All data is transmitted encrypted via a secure TLS connection

Do you prefer an Audiobook?

Listen to this audiobook FOR FREE with a 30 day free trial on Audible.

You can listen to a sample here.

Also on Amazon or iTunes.

In this novel, life turns toward a dark horizon for a precocious adolescent grieving for her father in 1941 Tennessee. It’s difficult to harbor secrets in a rural mountain town of maybe 80 souls, especially when adult siblings live within spitting distance of the family home. Most of the townsmen work at the sawmill, and most of the young women have been harassed at one time or another by creepy Johnny Monroe. But Louisa May McAllister, nicknamed Wildflower, knows that revealing her frequent forays to the cemetery, where she talks to her beloved late father, would only rile her embittered mother. She also knows to hide her “secret sense,” as it would evoke scorn from all save eccentric Aunt Sadie, who shares her tomboy niece’s gift.

“Those secrets come at a cost when, on one of her graveyard visits, Louisa May ignores her premonition of danger. The consequences somewhat expected yet still horrific are buffered by the visions into which the 13-year-old escapes. Sharp-witted, strong, curious and distrustful of authority figures not living up to her standards — including God — Louisa May immerses us in her world with astute observations and wonderfully turned phrases, with nary a cliche to be found. She could be an adolescent Scout Finch, had Scout’s father died unexpectedly and her life taken a bad turn.

“Though her story is full of pathos and loss, her sorrow is genuine and refreshingly free of self-pity. She accepts that she and her mother are “like vinegar and soda, always reacting,” that her best friend has grown distant, and that despite the preacher’s condemnation, a young suicide victim should be sent to “the head of heaven’s line.” Her connection to the land’s presence as vividly portrayed as any character’s makes her compassionate but tough; she’s as willing to see trees as angels as she is to join her brothers-in-law in seeking revenge. By necessity, Louisa May grows up quickly, but by her secret sense, she also understands forgiveness. A quietly powerful story, at times harrowing but ultimately a joy to read.”

The worlds of family, friendship, mourning, and love are explored in this moving, often humorous, novel about healing and hope. A character-driven novel reminiscent of the work of Reynolds Price in its ability to create a truly original Southern voice, The Secret Sense of Wildflower is certain to be embraced by fans of Sue Monk Kidd (The Secret Life of Bees) and Harper Lee (To Kill A Mockingbird).

“The Secret Sense of Wildflower is a historical fiction novel that plays on themes of perseverance, kinship, grief, and the remarkable strength of Louisa May “Wildflower” . . . I am a true lover of historical fiction and I would recommend this novel for any reader looking for an inspiring, intense, and deeply thoughtful story. The Secret Sense of Wildflower is indeed a book that deserves recognition for its beautifully crafted prose, well-written characters, and expertly descriptive landscapes.”

“Probably one of the best surprises this year almost slipped by me. It turned out to be one of my favorite reads this year! This is a story of family, loyalty, forgiveness and love. This is the type of book that I crave to read. It’s beautifully written in lyrical prose that I found myself slowing down to re-read. It has such a deep familial core, yet also has a darkness that makes you keep reading.. All of the characters are so true to the era and Appalachian culture and are all very believable. It is a true Southern tale. There are both great relationships and some very difficult ones that add even more layers to this story. What I really like is that Wildflower is telling the story from her own perspective. It brings such an innocent honesty that grabs your heart and doesn’t let go. I’m a sucker for a story told through a child’s eye and Ms. Gabriel interprets this protagonist beautifully. Though it has some disturbing moments, the story, as a whole, is wonderful and shouldn’t be missed. This is definitely a story that will stay with me for a long while and recommend it highly.”

“I was pretty blown away by how good this book is. I didn’t read it with any expectations, hadn’t heard anything about it really, so when I read it, I realized from page one that it is a a well written, powerful book.”

“The story is told from the point of view of Wildflower, which really makes the story even more powerful. I thought the author did a great job of capturing Wildflower. In some ways, she’s wise beyond her years, which makes her incredibly strong and resilient. In other ways, she is still very much a 14-year-old girl. At that age, it’s easy to think that you’re really invincible and this is exactly what gets Wildflower into trouble, but her strength and resilience is what helps her find her way back . . . Bottom line: A great story about a strong character!”

“I really enjoyed this novel. Gabriel does a great job revealing Wildflower’s interior world, as well as external events. I got immersed in the setting. The characters seemed so authentic. I could really feel the loneliness and separation Wildflower felt, even in her own family. Some of that is because she’s a teenager, but some of it seemed to be because she is quite a unique person, and while it’s of course OK to be different, it’s also hard. Wildflower’s inner strength, as well as her humor was a joy to read. I bought copies for my 13 year old granddaughter, as well as my 76-year-old sister, and they both loved the novel.’

“Susan, I have never been a reader of fiction. My wife reads fiction all the time. Not me. But, I heard the whispers. While walking around in Amazon, I stumbled upon your books. Wildflower. Lily. These wonderful ladies have become my mountain friends. I love them. You have made me a lover of fiction. I want more! Thank you. By the way, I am 71.”

“The Secret Sense of Wildflower had me hooked from almost the beginning. Louisa May, aka Wildflower, is such a compelling character. From the start of the novel, it was clear that she was more mature than her age, which I think is a blessing considering all the grown-up issues she has to deal with as the novel continues on. Wildflower was a strong young woman and I couldn’t help but be on her side no matter what issue arose next. If you liked Little Women or if you love historical fiction and coming-of-age novels, this is the book for you. Definitely add The Secret Sense of Wildflower to your TBR pile; you won’t regret it.”

“This story will move you as it twists and turns and eventually connects the dots left behind whilst developing into a work more than worth the read. Yes, it’s THAT good! I found the story completely enveloping. You laughed when the characters laughed, grieved when they grieved and sought happier places when the ugliness of the world presented itself front and center. In some ways it reminded me of the infamous To Kill A Mockingbird; perhaps because of the young narrator and the strong voice with which she was blessed, perhaps because of the time and setting used, or perhaps simply because it was that striking of a work. Whatever the reason, it left its mark on me and for that I can only extend my thanks to the author with sincerity from the bottom of my heart. A masterpiece; plain, simple, and resilient like the flowers the young lead is named for.

“What I really like about the story, outside of the gentle pacing and tone, and that is Wildflower doesn’t let you feel sorry for her. She’s a strong girl, and very observant, with a disobedient sense of humor. The world she sees, she’s really not supposed to see in the way she observes it, though it’s what I really loved that about her; and actually about all of the characters”

“I’m mad at Susan Gabriel for making me lose a day’s work. Of course, I chose to not put the book down. I HAD to know how it all worked out. So, I can’t be mad. It was such a great read. I am recommending it to everyone I know.”

“I enjoyed Gabriel’s first novel, Seeking Sara Summers. The Secret Sense of Wildflower is quite a departure, or perhaps demonstrates the breadth of Gabriel’s abilities. It also shows her depth, as the writing is very solid. The novel is set in 1940’s Appalachia and is full of humor mixed in with a serious theme. Wildflower (her nickname) is a spunky teen whose beloved father died a year or so ago and she and her mother and three sisters forge their way without their man. A local boy, Johnny Monroe is one of those mountain cretins you don’t want to meet (think Deliverance) and he and Wildflower have a dramatic encounter. I don’t want to reveal the storyline, but I recommend this to those who are tired of badly written novels and want a lyrical, suspenseful story that is hard to forget.”

“Thank you for being such a wonderful storyteller! I just finished Wildflower(I really enjoyed it.) and look forward to “meeting” Lily.”

Check out all of Susan’s books here.