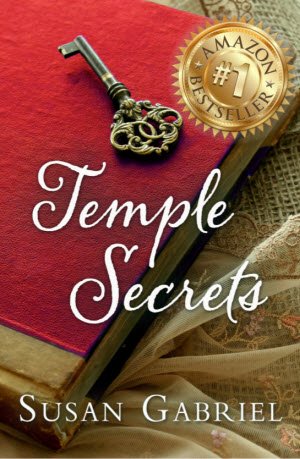 I don’t often write authors of books I have read; however, I just must tell you how very much my book club and I enjoyed reading Temple Secrets. Most of us are “wise, old Southern ladies,” and we thoroughly enjoyed both reading and discussing your book.

Just finished Temple Secrets and loved it !! Probably my favorite book of the year. Have ordered The Secret Sense of Wildflower thru Amazon and can’t wait to start it !!

Absolutely loved this book. Full of laughs and family moments along with Southern charm!

Great book, I was sad when I finished it. You should write a 2nd, I’d love to know what everybody gets up to..

LOVED Temple Secrets. My first Susan Gabriel book but I’ll be reading more of her works especially if the characters are anything like Queenie or Iris. Highly recommend this book. A great summer read.

Well, I just finished my first Susan Gabriel book Temple Secrets …… I Loved It and have Already downloaded Wildflower and Lily’s Song …… Thanks Susan you’re one of my new favs

Temple Secrets has to be one of the best books I’ve read in a long time. Thank you for an amazing reading “adventure”!

Really enjoyed this book! Had just read Secret Sense of Wildflower and Lily’s Song so spotted this one and had to read it! Definitely loved all the characters ( except Edward ) and will recommend it!

I just finished Temple Secrets and loved every word you wrote. It is the first of your books that I have read and when I was done I immediately wrote a review on B&N and then downloaded The Secret Sense of Wildflower. Thank you so much for writing such a wonderful story. I look forward to reading more of your novels and PLEASE continue to write!!

I dearly loved Temple Secrets. I will never look at KFC or Piggly wiggly the same as before. Reading this was a delight.

Book One of the Temple Secrets Trilogy

A town held together with secrets. A wealthy widow looking for an heir. Her choice could shame high society into submission.

Eighty-year-old Southern aristocrat Iris Temple’s health may be failing, but her wit is as sharp as ever. Before she joins her ancestral ghosts, she must pick an heir to take over her sprawling estate—and the book of secrets that’s kept her family in power for generations. But between her scheming son, her estranged daughter who abandoned Savannah years ago, and her illegitimate half-sister, she’s working with slim pickings.

“The secrets and lies of Savannah, Georgia’s upper crust come to light in Gabriel’s Southern Gothic novel. Gabriel unfolds her story deftly, with well-paced revelations about the complicated relationships between the mansion’s white and black inhabitants Gabriel also evokes the Spanish moss covered atmosphere of ghost-filled Savannah, and the Temple mansion in particular, with satisfying spookiness. The author’s thoughtfulness about masters and slaves, employers and servants, and family relations also contributes to a satisfying read. Savannah’s atmosphere, culture, and history flavor this engaging tale of intertwined families.” —Kirkus Reviews

“I loved this book! I have lived in Savannah for 25 years and you are spot on with your characters and the flavor of Savannah. Thank you for writing it and I look forward to reading your other books.” — Linda Farley

(Also available at Amazon or Barnes & Noble or you can also easily order it through your favorite local bookstore!)

Click Buy Now below to get your autographed paperback copy and start enjoying Temple Secrets. Includes a personal dedication if desired.

Temple Secrets, autographed paperback edition. Only $16.99 plus shipping. (You do not need a Paypal account to checkout via Paypal.)

Note: All data is transmitted encrypted via a secure TLS connection

Do you prefer an Audio Book?

“I finished listening to Temple Secrets today. I’m so sorry it’s over. This is a wonderful book and I have been recommending it to all my friends. Time to pick another Susan Gabriel book!” – Kay Brinkley

Go here to be notified when Susan’s latest book is published.