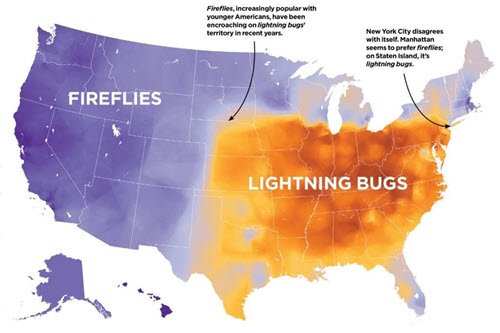 Fireflies or lightning bugs? When I was growing up in Tennessee, we always called them lightning bugs, and I still call them that. Here in the mountains of North Carolina where I now live, they appear every evening as the sun is setting. I love watching them light up the forest.

In the United States, glowing insects are known as “fireflies” or “lightning bugs” depending on where you live.

“Firefly” is the more common term in the West and New England, while people in the South and most of the Midwest tend to say “lightning bug.”

In Japan, fireflies are revered and considered the dead souls of warriors.

Even though fireflies put on a pretty great light show, it’s not just for entertainment. The flashing of their light is how they communicate with each other – especially for courtship rituals. Males flash to let the ladies know they’re looking for love… and the females respond with flashes to say they’re interested.

An Apache legend tells of a trickster Fox who tries to steal fire from the firefly village. To accomplish this, he fools them and manages to set his own tail on fire with a piece of burning bark. As he escapes the firefly village, he gives the bark to Hawk, who flies off, scattering embers around the world, which is how fire came to the Apache people. As punishment for his deception, the fireflies told Fox that he would never be able to use fire himself.

Depending on what part of the country you’re in, you may have grown up calling it a candlefly, firebob, firebug, glowworm, jack-o-lantern, lamp bug, or will-o’-the-wisp.

Did you have lightning bugs or fireflies when you were a kid? Do you have them now?

Have a good weekend! Stay safe. Be kind.